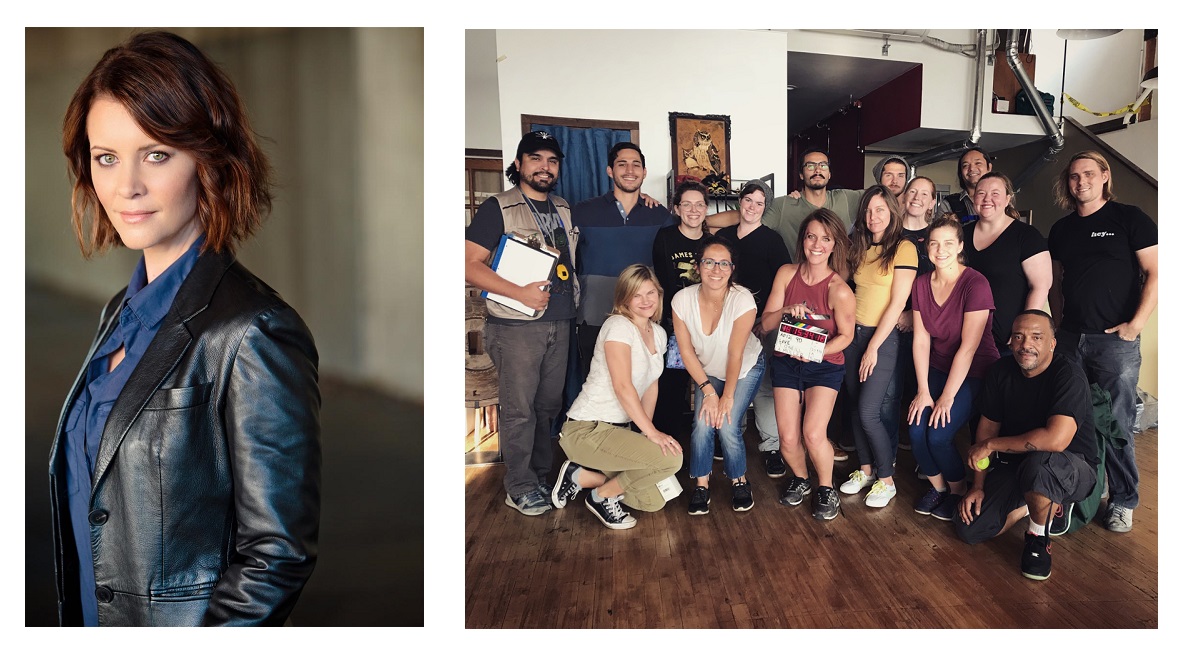 The Chimaera Project was lucky to get to speak with Taryn O’Neill a professional actress in Hollywood for 15 years by way of Vancouver, Canada. Taryn also writes and produces sci-fi content. Today she speaks with us about her new career focus of writing and directing telling stories about science and technology and how they will affect our future as human beings.

Thanks so much for talking with us. Please tell us more about your goals. It seems you have worked in many areas of the entertainment industry and you are getting really clear with yourself about your path.

Yes! It certainly took me a while to get clear on my unique path as a storyteller and give more energy towards it. What I can now say is that my goal is to create content, whether it be a blog post or a feature film, that explores my deep thoughts about mankind and its future, addressing the uncertainty we all feel while highlighting the underlying connection between us. (Entanglement is my favorite physics topic!) We, as a species, are entering a paradigm shift that we are ill equipped to handle. Climate change, artificial intelligence, bio tech, a society disconnected from community and experiencing greater bouts of anxiety (potentially from social media). These are big lofty topics and I don’t have a PhD! But I am garnering the courage to address them as a storyteller. I love seeing links across disparate subjects, seeing a narrative pattern, or a trend that is forthcoming. I read a tech article and immediately see a story set in the future about how this technology is going to affect people. Storytelling is a powerful vehicle and I am really looking to make a difference with my projects. No matter how much I would love to play a badass Mad Max character, my ability to craft a unique story that that could potentially help people navigate our changing times is a lot more important.

We couldn’t agree more. It’s why we do what we do. Stories affect people, teach people and create change as well as navigating unsure waters. You seem to have a knack for navigating those waters yourself, what is one way you have done that?

Forcing myself to take leaps of faith! Directing, writing, acting and producing my recent short film LIVE took daily leaps of faith, especially as I was putting my own savings into the project. I lived by the mantra: ‘Get comfortable in the discomfort’. Also, I will always remember the impulse to write the blog post which ultimately launched our science advocacy and creative team Scirens. I had watched Bill Nye The Science guy debate Creationist Ken Hamm and was furious! I couldn’t fathom how 10s of thousands of people were supportive of Hamm’s anti-science, the Earth is 6000 years old, beliefs. It terrified me that miseducation had proliferated to this extreme. So I wrote a call to action post stating that science literacy was a paramount issue if we were to combat climate change and technological disruption and elect capable leaders. And I posited that ‘actresses’ could be Trojan Horses — unexpected but effective champions of science that could reach a broader audience. It took courage to put my post out there as it definitely triggered an inferiority complex — who am I to write about this? I don’t have a science degree! But it was shared widely and inspired a number of us to ultimately form Scirens. Which lead us to connect with amazing scientists and organizations like the Geena Davis Institute for Gender in Media — supporting our belief that showing a female and diverse scientist or engineer on the screen is effective in encouraging young women and people of color to become them. Representation Matters. The data shows it. But it’s still an uphill battle to move the needle towards more science ambitious shows, especially with women at the helm. But we need these type of shows. Hollywood talks a good game of wanting to expand diversity and scope of their shows but they still have a systemic problem with the type of programming and movies they distribute. Your traditional network show may have a more diverse cast in 2018 vs 2012 but the show itself follows the same structure which was birthed in a very white male writers’ room. Change will come from outside the system.

We love that you think that and we do to which is one of the foundations for The Chimaera Project itself. But that path to change isn’t easy. How has it been difficult for you and what have you noticed about that?

The road I’ve taken has been anything but smooth; it feels like it’s constantly under construction! However, I must admit to having both privilege and luck assist me at the beginning of my journey in Hollywood and in all my career transitions… enough to keep me motivated and hopeful. By luck and privilege I mean that I attended a great college that offered a study semester in LA where I got internship experience and studied at USC Film School. This helped me get a job at William Morris within a week of moving to LA. When I decide to pursue acting, the first commercial I auditioned for, I booked. The first studio movie I booked. The first script I wrote was a finalist at the NYTV Fest FOX pilot contest. I am the poster child for beginner’s luck! And then ‘reality’ sets in. And by reality I mean rejection. The road for an actor is never smooth as it is riddled with potholes of rejection. They can really derail you. I found myself sinking into quasi-depression after coming close to a number of great parts and then not booking them, which is when I jumped into producing a web-series. It happened to release the year that the Streamy Awards were launched and we got 6 Nominations — alongside shows like Joss Whedon’s DR HORRIBLE SING ALONG BLOG. This whetted my appetite for self-produced projects and inspired me to start writing. So I ventured onto a new road, or at least got some new shock absorbers to offset the highs and lows of acting. I’ve recently upgraded to a 4×4 vehicle as I have added the director hat and am focused more on creating projects while navigating career changes as an actor. It’s a difficult time to make a living as an actor as pay rates on shows have dropped precipitously because of streaming content and one half of commercials are now being filmed non-union. The road is anything but smooth, but that makes it exciting. (And I need to stop with the driving metaphors :))

Absolutely. Excitement comes in the ups and downs, but mostly in the learning. Have you learned anything or discovered any personal wisdoms that you could share with us?

I have offered lots of personal wisdom through my own experiences and epiphanies over the years on my tumblr blog OperationBABE and on the awesome site MsinTheBiz.com. I’m a bit of a ‘be your own guru’ junkie! I read a ton of inspirational ‘self-help’ books (can there be a different word for them as that is so derogatory, don’t you think?) I meditate daily. I journal. Being an actor gives you the tools to go deeply into yourself and explore all the muck and guck that messes with you. The main advice I will always share is do yourself a favor and let go of expectations and entitlement. You are not ‘owed’ anything. Most people who I see angry and embittered about their careers are that way because they think that, because of their talent, their looks, their training, what-have-you, they are owed success. They become consumed with resentment. It’s such a waste of creative energy. This town isn’t fair, life isn’t fair. There are highs and lows, the big gig you book that you think will change your life never does, at least in the way you expect. I am working hard to step away from other people’s podiums. I don’t want to compete and rank like I did when I was a skater or a student. I want to collaborate and create. And that can’t be done in a zero sum game — which Hollywood and the media likes to perpetuate.

That seems like a very level-headed place to be coming from. Not easy when all the passion of creation and desire to pursue this career are at hand. But you have managed it all with grace. Do you have any stand out moments of which you are especially proud?

I have a few big moments that I am proud of: completing my short film, and researching and writing an 80 page ‘script-ment’ about physics and music in 11 days to meet a deadline for a script competition. But just surviving Hollywood and continuing to pursue my career and goal to tell meaningful, important stories is what I’m most proud of. I haven’t given up. I have so much joy in what I do. There have been easier roads to take, but I declined. Rather, my purpose and resolve have only gotten stronger, especially in this political climate.

Those are remarkable. We congratulate you. We are glad you are here and creating. And speaking of you, just bringing YOU to the world more, as you look at yourself and your life and career with as much of an impartial retrospective lens what do you see?

I see a creative adult who has regained her childlike curiosity I’m realizing that my current journey as a storyteller is rooted in the profound curiosity I had as a child for ‘the big questions’: Why are we here? How does the Universe work? Are we alone? I would stare up at the stars from my backyard and ponder those questions as a child. I lost that awe and wonder as my life followed a rigorous, achievement based path. I was a competitive figure skater and then went to Duke University to study Economics, but the performing arts, the arts in general would always call to me. It wasn’t until I completely gave myself over to them, to acting and creating, that I rediscovered my curiosity in the Universe. And that has only fed my creative work and has given me a wider lens through which to understand our life. That’s actually what I’m going to call my new blog series: Widen Your Lens. As I think we need to look beyond our individual selves and consider our society through a global lens if we are to tackle the big issues of tomorrow.

Thank you so much Taryn for your lovely perspective and for taking the time to chat with us. We look forward to what more Taryn story-telling will bring to the zeitgeist.