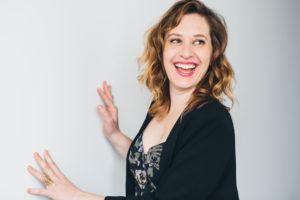 Jennifer Pogue, an actor & producer living in Toronto, was kind enough to spend some time with The Chimaera Project sharing her story. To learn more about Jen, visit her online at www.jpoandco.com or on social media @jenpogue.

TCP: Thank you so much for taking time out of your busy and many-hatted life. We would love to talk with you a little more about how you bounce between acting and producing. But before we dive in, can you tell us a little bit about the challenges?

JP: Hey thanks for the interest, I love chatting shop-talk! The acting life has been a struggle since the beginning of my professional pursuits, and even though I finally have some awesome credits, agents, and experiences behind me (10+ years later), it’s still a constant grind to continue being seen and considered. You can prepare and work yourself crazy when the opportunities arise, but those opportunities are rarely in my control and neither is actually landing the role when it comes down to it.

JP: Producing has helped in easing those mental states, it helps to understand the processes better as you are so ingrained in every step of the project, it helps just in keeping you so freaking busy that you don’t have the capacity to dwell on that fact that you totally flubbed that last audition!

TCP: That is a great way of looking at it!

JP: Whether I’m on-camera or flailing behind it – organizing a stack of contracts and tending to the craft table, it helps to truly exercise my goal of become an all-encompassing story-teller who brings compelling content into the world alongside fellow kick ass creatives.

TCP: Yes, we have found most of the women who have graciously agreed to be featured in our Spotlight are all driven by the goals of being all around story-tellers in whatever capacity they may find themselves.

JP: Those sound like my kind of people! I’m still learning & hustling every day, and I’m still waiting on the occasional table to pay my rent. With such an inconsistency of pay-checks (and I’m a very practically minded person…), the biggest hurdles are to not compare myself to others, and to stay on top of those constant check-ins with myself and my goals, to remind myself that I’m okay with where I am and why I do what I do and to continue to trust my instincts, no matter the outcome.

TCP: Well, it sounds like you have it figured out to us. You have done a lot of different things, you must be extremely proud of your experiences.

JP: I’m glad it looks that way haha. Thanks! And yes – I’m very proud of almost every project I’ve worked on. I’ve had some really fun roles on television shows such as PBS’s “Odd Squad”, Disney’s “Backstage”, CBC’s “How to Buy a Baby”, and feature films such as “The Masked Saint” (on American Netflix now) and “Chasing Valentine” (Amazon Prime). I’ve produced on over a dozen short films that have showcased and won awards all over the world. I recently produced on my first feature film “Things I Do for Money” and I’m loving the post-production process for this, it’s going to be such an awesome film, our small but mighty team has been working so hard.

TCP: But besides producing and acting, you have also given back.

JP: I put a lot of time & energy into participating and giving what I can to the Toronto community, I’m the Industry Producer for The Canadian Film Fest (an amazing festival dedicated to supporting Canadian filmmakers) and an associate producer for both Women on Screen and The Firecracker Department, two organizations dedicated to encouraging and celebrating dynamic female-identifying professionals in the film industry through various programming and events.

TCP: Amazing! And we hear you have something else up your sleeve.

JP: Yes indeedy, very recently we launched a Podcast which I co-produced & co-host alongside my amazing colleague Lara Jean Chorostecki called Women on Screen Out Loud: ThePodcast Essays – I’m beyond proud of how this has turned out. It’s an incredibly inspiring series filled with impeccable women in various roles throughout the industry who share their stories to success and advice for the industry. It’s very special to me (and hopefully to others!).

TCP: Lovely. Now, before we let you go, since we want our community to see the varied stories that bring creative leaders to where they are today, would you take a moment to share your path with us?

JP: Since my 7th grade production of Snow White where I played the Mirror (there were not many roles to distribute), I knew that I was drawn to performance. Very ironic for a super shy kid, but it ignited something inside me and I never looked back. I kept acting in community & semi-professional productions as a teenager and it very quickly became my identity and way of life. It was a natural transition for me to attend a performing arts post-secondary program (Humber College) where I thrived. But it was only after I graduated and jumped head into the real world of film, television & theatre auditioning when I realized just how small of a fish I was in a very big talent pool.

It took a number of years navigating the way the business operated (something they do not properly prep you for in Acting School), found my circles of support, and realized that if I was to survive in this world – I needed to stop waiting for the phone to ring with my next big gig, and get out there and start making my own work! I completed a post-grad program that focused on writing, producing & managing media, volunteered on film sets, made my first short film and voila! The producing chapter of my career began.

TCP: We are thrilled that you were able to share your experiences and wisdom with us today. We look forward to seeing you on screens and behind them in the years to come. Thanks again for being a voice in the industry!

JP: Thank you for the platform to share, Chimaera pals! Keep on rocking it 🙂